The biggest game to-date was played at Three Rivers School in Sunriver, Oregon. It was dubbed “The Sunriver Open” by Danny just after the first round ended.

This historic game marked the first time that a women-only round was played. It included Kathy Spielman, Anita Price, Melinda Mallek, Linda Sawyer, Aidan and Sarah. Kathy Spielman won launched her temporary reign as the #1 Female Cross Country Big Ball Player. Subsequent coed rounds saw the addition of the guys: John Spielman, Danny, Scott, Steven Spielman, Jeffrey, Collin and Nolan. Everyone had fun and the Three Rivers School Theater got a top rating from all players. In particular, the players enjoyed the “pit” goal that occurred when Kathy Spielman got a stick in her leg. Besides Kathy’s unfortunate accident, other casualties occurred when Collin and Danny got stung by bees. 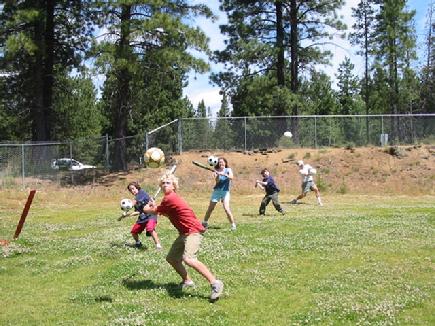 Start of Round 3. John Spelman, the Father of Cross Country Big Ball is furthest from the camera starting a winning round. 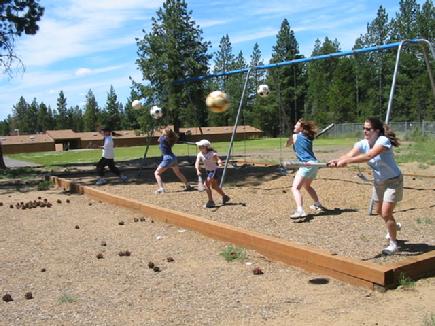